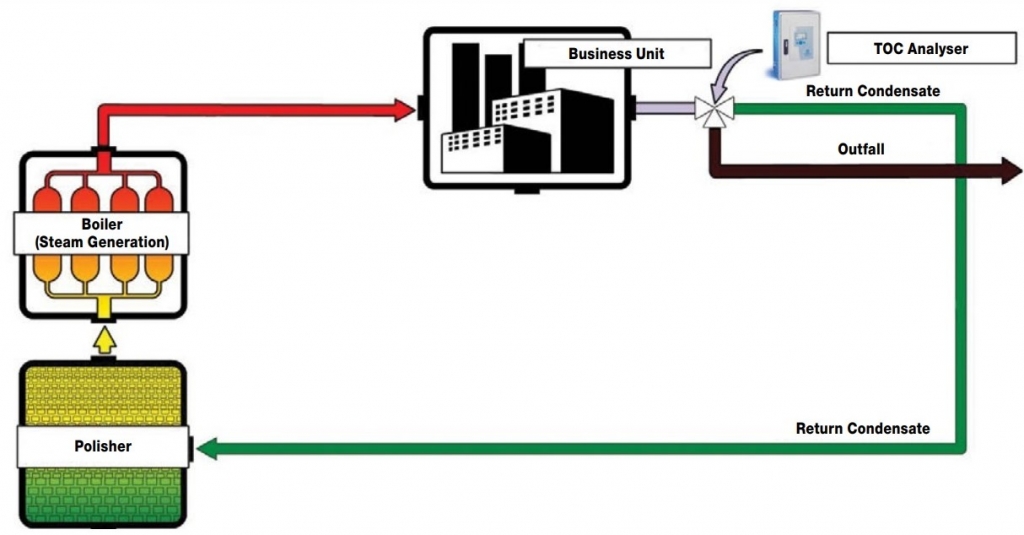 One of the more common applications our customers have used the BioTector TOC analyzer for is condensate return. BioTector has successfully made condensate measurements in oil refineries, petro-chemical and corn wet milling plants. Condensate is critical to processes which require very high temperatures. When steam flows out from the boiler it passes through a series of heat exchangers that heat the process liquid. This can also be a point where organic contamination is introduced into the condensate return system.

Occasionally the process liquid “breaks through” into the condensate return system and this almost always happens at the heat exchanger. If this contaminated condensate is sent back to the boiler you could start to see a variety of problems such as reduced efficiency or possible failure of the boiler if allowed to operate for extended periods of time in a break through condition.

There are very specific costs associated with dealing with contaminated condensate, such as:

When break through is detected the boiler operator will typically divert the potentially contaminated condensate away from the boiler by sending it to the sewer. The new water (make-up water) coming into the boiler system must be chemically treated and then heated from its ambient temperature to the required steam temperature. This requires much more energy than just maintaining the temperature of returned condensate. Increased water and fuel usage has the largest impact on operating cost.

Clean condensate is treated water (de-mineralized, de-aerated and de-ionized). The water used must be pure which means no suspended solids, organics or minerals can be present in the system. As contaminated condensate is run through the boiler and converted to steam it leaves behind solids which coat the tubes and begin to insulate them. To prevent this situation operators have developed methods of minimizing the potential for contamination or slowing the process down.

Both of these methods are very inefficient ways of dealing with the issue of contamination. Every gallon of condensate requires 1 gallon of make-up water that needs to be chemically treated and then heated to the required steam temperature to be made available for use in the boiler.

The BioTector can be effectively integrated into a boiler protection programme with no disruption to the normal operation of the system. Operating costs as well as unplanned maintenance work can be greatly reduced by continuously monitoring the quality of the return condensate. Knowing the quality of the condensate (typically 100ppb to 5ppm) the customer no longer has to flush potentially good condensate because they cannot verify if it is clean.

Fines can also be avoided by reducing the amount of water going to the sewer that would ultimately need to be treated by the local municipality. The greatest cost savings is in the energy of fuel saved by not having to heat make-up water to the required temperature to be able to be used for process control.

The BioTector has the ability to transmit a signal to the customer’s control system to notify them of an excursion. This allows the operator to divert the contaminated condensate away to avoid damaging the boiler. The condensate system can be returned to normal once the contamination has been cleared from the system.